One Million Patrons and Counting! 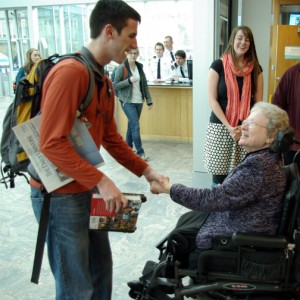 Today the library celebrated the one millionth patron visit for the year 2011. Ethan Geisler, a Mechanical Engineering major, entered the Harold B. Lee Library just before 11:00 am and by our count became the one millionth patron to enter the building since January 1, 2011. University Librarian Julene Butler was there to welcome him. He received a free netbook to so he could access the many electronic resources in the library including online journals, databases, e-books and image collections. He also received a book about Hollywood films made in Utah. The book represents the library’s print collections as well as the BYU Motion Picture Film Archive, which was one of the primary sources for the book.

Congratulations to Mr. Geisler! This year marks the library’s 50th anniversary in its current building. The library expects over three million patron visits this year. We are providing rotating exhibits on the history of BYU’s library’s along with our traditional role providing scholarly information to patrons online and in print, as well as in film, video, and music.

Mr. Geisler is not alone. The library staff is happy to welcome all our patrons. 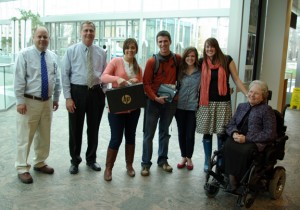