Everyone Loves Films, But Who Takes Care of Them? 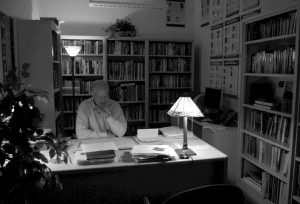 Everyone loves a good film. The library has a wide range of films and videos from early black and white shorts on reels to modern Blu-ray disks. We have a Documentary Film Series and the long running BYU Motion Picture Archive Film Series. Tonight the library is showing The Devil’s Brother (1933), starring Stan Laurel and Oliver Hardy (7:00 pm in the library auditorium). The films are fun, but it takes a lot of work to preserve and present them. What most people don’t know is that our film archive also holds the papers of people who made films. We have production notes, costume designs, music scores, and even Academy Awards. These materials are available to researchers. When a new Blu-ray release of The Ten Commandments was being prepared, researchers came to BYU to study the DeMille  papers for the material on the bonus disks in the set. Our curator James D’Arc is the person who collects, organizes, preserves, and teaches about these materials. Here is a slide show that tells you more.