BYU’s Expeditions of Discovery: The World Is Our Campus

The Harold B. Lee Library has installed a new exhibition featuring journals, publications, and artifacts from expeditions connected to BYU. This exhibition is unusual because many of the other cultural institutions on campus have contributed to the project. The Museum of Peoples and Cultures has provided items from the university’s first expedition in 1900. The Monte L. Bean Life Science Museum has loaned amazing insects from their collection that reflect fieldwork. And the BYU Museum of Paleontology has provided a fossil jawbone from an Allosaurus to display alongside works by “Dinosaur Jim” Jensen.

BYU’s story of discovery goes all the way back to Karl G. Maeser who asked that missionaries send the school interesting items from the lands they traveled through. Benjamin Cluff, the second president of BYU, set a good example when he presented Maeser with an album of ferns he had collected while serving his mission in the Sandwich Islands.

Exhibit highlights include expedition packing lists for students from 1900 and from 2013. It may surprise some to learn that students in 1900 traveled by wagons, horse, steamship and on foot while in 2013 students traveled by car, rail, plane, and by yak!

Located on level 3, the main floor of the Harold B. Lee Library, BYU’s Expeditions of Discovery opens Monday, May 12 and runs through September 30, 2014. Admission is free and the exhibition is open during all regular library hours.

Just look for the large Ceratosaurus skull at the entrance to the exhibition. 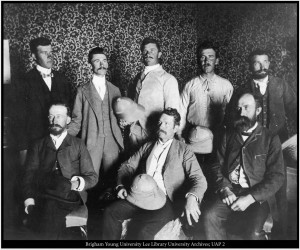