The library just added more databases to our resources. We suggest you try The Telegraph Historical Archive. (You will need a campus login to access many of our online resources.)

The Daily Telegraph was launched in 1855, and within 10 years was able to claim it had “the largest circulation in the world,” boasting world-famous writers such as George Augustus Sala. For more than 150 years it has shaped and recorded the history and democratic values of the United Kingdom. The Sunday Telegraph was launched as a sister paper in 1961, and The Telegraph Historical Archive, 1855-2000 provides users with access to both the daily and Sunday editions.

Just for fun, we searched for Brigham Young University and were not disappointed. 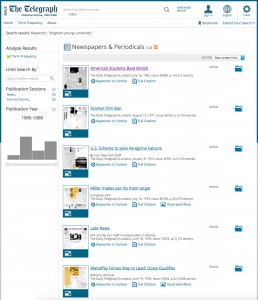