The Documentary Film Series is back in the Alice Louise Reynolds Auditorium (HBLL 1060) on Thursday, April 5th at 7 PM in conjunction with the School of Communications.

Two student documentaries will be screened – The Underside of Paradise by Paesha Tuttle, a film about mitigating the effects of diabetes in the Fiji Islands, and Just Like Us by Liana Tan, a film about refugee camps in Greece.

A Q&A session will be held with the students after both screenings. 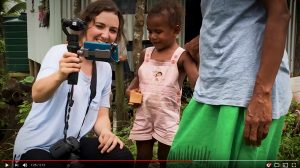