The library is celebrating the 50th anniversary of the film 2001: A Space Odyssey.

Astronauts travel to the moon to study a black monolith before another mission to Jupiter goes awry due to a malfunctioning computer system. Later regaining control of his spaceship, the surviving astronaut travels through a dazzling star-gate.

Join us on September 28th at 7:00 pm in the Alice Louise Reynolds Auditorium on level 1 for a free screening. 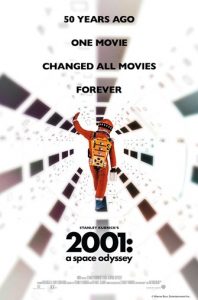