The First Vision Goes to the Movies!

In the 21st Century most people encounter Joseph Smith’s First Vision through the medium of film. How has the First Vision been depicted in film throughout the history of the Church? How did the filmmakers approach the translation of this sacred story from one medium to another? And how has film influenced our perception of Joseph Smith’s grand theophany?

Thursday, February 13 at 2:00 pm in the Alice Louise Reynolds Auditorium. 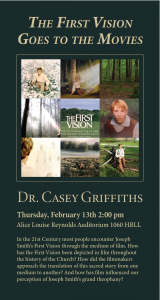