The chart, which is an updated version of the original in Salt Lake City, was collected by Michael Kennedy and printed with the help of BYU’s Computer Science department. 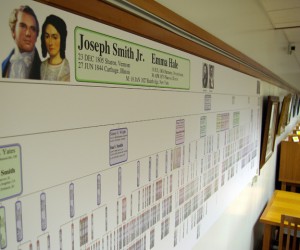 Michael Kennedy, who donated the chart, is a descendant of the prophet and also a member of the Joseph Smith Jr. Family Organization Committee.

Kennedy discovered about his ancestors while writing a genealogy paper in high school. Soon after which he joined The Church and became the first descendent of Joseph Smith to hold the Melchizedek priesthood.

After the death of the prophet, Emma Smith and her children did not join Brigham Young and the pioneers on their journey west. The chart reveals that the descendants have spread throughout the world, including a large population now living in Australia.

Kennedy continues to travel the world with his wife as they search for more descendants.