Thomas Jefferson, the Qur’an, and the Harold B. Lee Library 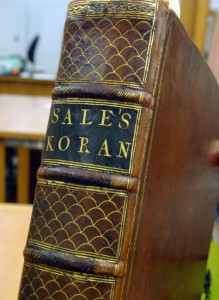 There is a lot of talk in our community about the ideas held by the founding fathers of the United States. As a library we’re not taking sides, we’re just pointing out that some of the early leaders of our nation were very well read. Thomas Jefferson, for example, owned a wonderful library. One of the early books in his collection, probably from his student days, was a copy of the Qur’an which he categorized under jurisprudence. Jefferson’s copy was published by George Sale and was one of the best English versions available in its day. The book was first published in 1734 and Jefferson obtained a copy from the second printing in 1764. It is believed that through his studies Jefferson was moved to protect religious freedom in America. His influence is seen in both the legal code for the state of Virginia and in the United States Constitution. 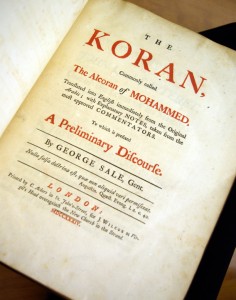 Jefferson’s copy of the Qur’an, titled The Koran; commonly called the Alcoran of Mohammed, was part of the library he sold to the U. S. government to rebuild the Library of Congress after it was destroyed in the war of 1812. Our library has a similar copy, though ours is from the first printing. In person the book is larger than you might expect. More importantly, it still contains the words that inspired one of our founding fathers to fight for freedom of religion for Americans. 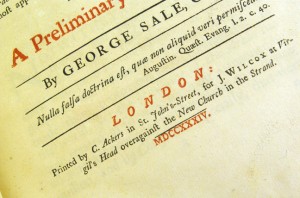 Sale’s Koran is held in the vaults of the L. Tom Perry Special Collections and can be studied in the Special Collections reading room. It is not available for circulation because of its age. If you would like to learn more about Jefferson’s Qur’an here is a link to a recent article in Saudi Aramco World. The library has the print version available in the periodical section on level 2 of the library.