Cecil B. DeMille made the first feature film in Hollywood in 1914 and, until his death in 1959, was the most successful filmmaker of them all. His crowning achievement, The Ten Commandments, was also the most expensive Hollywood film up to that time. It paved the way for Hollywood’s growing use of visual effects, after the reaction to the still impressive parting of the Red Sea sequence. The story pits the Hebrew-born prince against his avaricious cousin in the court of Sethi, and afterwards as leaders of their kingdoms. There is also a Cold War political edge to Moses’s challenge to Rameses: “Is man the property of the State, or free under God?” DeMille’s second attempt at this subject (the first being in 1923) took him to Egypt for extensive location shooting, including Mt. Sinai. This is the most beloved and enduring of DeMille’s 70 motion pictures. No one could make a movie spectacular quite like Cecil B. DeMille. L.Tom Perry Special Collections is the home of the Cecil B. DeMille Papers, and items from the collection will be shown prior to each of the two complete screenings. Paramount Pictures, 1956. 221 mins. Technicolor. Director: Cecil B. DeMille

The BYU Motion Picture Archive has arranged this screening of the film in conjunction with the exhibition “So Let it be Painted,” which contains the paintings DeMille commissioned Arnold Friberg to create showing the 8 Faces of Moses. 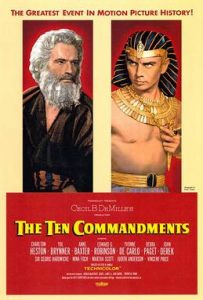