The Library Film Series presents The Two Towers on Friday, July 13, at 6:00 pm in the Alice Louise Reynolds Auditorium on level 1.

During the summer the Library is taking a break from its tradition of showing classic films and we’re screening movies based on books.

Planning this series we learned that you don’t just pick any book to make a movie as you can see in this video.

Admission is free and the public is welcome.

This is the extended version of the film. Run time is 236 minute (3 hours and fifty six minutes). There will be an intermission approximately halfway through the film.

As always, bring friends not food to the auditorium. 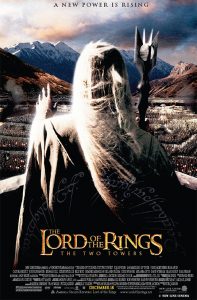 Plan ahead, on August 10, we will show The Return of the King.